Ralf Tech’s journey from a scuba-gear company to a new presence on the divers’-watch scene.

When you give a watch brand an oddball moniker like Ralf Tech, you expect almost every interviewer’s first question to be something on the order of, “Where did you come up with that name?” or, perhaps a more succinct, “Who’s Ralf?” I pose the first query to Frank Hughye, the affable Frenchman who founded the brand, over lunch at the Ritz-Carlton in Miami’s South Beach. Hughye (pronounced Hungh), who had obviously answered it one too many times, kindly acquiesces to satisfy my (and, I’ll wager, your) curiosity. “I was sitting in a restaurant with three friends, and we were searching for a name,” he says. “Sometimes when you brainstorm too much, you don’t find anything right. So I looked around the table and noticed the first letters of all my companions’ names — Roseline, R; Arnaud, A; Laurence, L; and myself, Frank, F. The only way to arrange those letters into a name is ‘RALF.’’’ The twist to this tale is that the business he was naming in this quaint fashion was not a watch brand but a diving-equipment company. How the latter evolved into the former is a story all its own.

For Hughye, it begins with a love of watches that came long before his interest in diving. He began collecting watches at 12 years old, at the time mostly Casios and other low-priced digital models. At 22 or so, he scraped enough cash together to buy his first Rolex, and the hobby snowballed from there. Today, he estimates, he owns around 500 watches, and he continues to collect, mostly vintage pieces. Watches did not, however, figure into Hughye’s early career path. In the late 1980s, he was running a consulting company that dealt in producing goods for American and European companies in Taiwan and China. Among his clients were the surfgear companies Billabong and Quiksilver; Hughye was a surfer himself, but not a diver until one day in Thailand in 1994, when he and a business associate were caught in a days-long rainstorm and decided to learn diving at a local dive shop. What the hell, Hughye reasoned, they were already going to be wet; might as well do something enjoyable and maybe useful. Four days later, Hughye had his divers’ certification, as well as a new, all-consuming hobby. 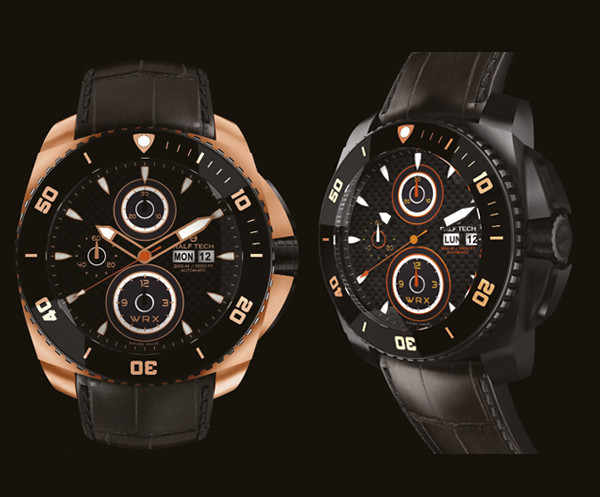 Hughye had become, in short order, a serious diving enthusiast, and by 1996, a certified instructor, but he never took to the suits and equipment that were made specifically for the sport. Instead, he found the wetsuit that he used for surfing to be much more comfortable, and much better at protecting the body from strong waves and trapping in heat. “I asked why it was not possible to use this type of equipment in diving,” he says. “The only answer was that no one had done it before. Diving, surfing, sailing — they are all different worlds that, surprisingly, don’t communicate much.” Hughye broke down that barrier when he began consulting for the sporting goods company U.S. Divers, which incorporated many of his ideas from the surfing world into its line of diving equipment. Eventually Hughye decided to keep those ideas to himself, and launched his own brand of diving equipment in 1998, the first company to bear the name Ralf Tech. Its equipment was eventually sold by more than 2,000 retailers in 25 countries, and while it never became a household name, Ralf Tech did become known as a hot brand for professional divers in the know, as well as an outfitter of several European navies.
Hughye had turned one of his hobbies, diving, into a successful business. At the time, he was still keeping his other hobby, watches, separate from his professional world. The first Ralf Tech watch might never have come about if not for a fateful meeting in 2003 between Hughye and a well-known French scuba diver named Pascal Bernabé. Bernabé was the European record-holder for the deepest dive, 250 meters below the surface.
When he met Hughye, he declared that he intended to break the world record of 318 meters, and he was interested in using Ralf Tech diving gear in his well-publicized attempt.
Hughye’s first reaction was to ask Bernabé why he’d approached his company rather than one of the numerous larger, better-known ones. Apparently, according to Bernabé, those companies did not want to risk having their logos found on the body of a man who could conceivably perish at the bottom of the sea in this risky attempt. Hughye today jokes that he told Bernabé, “It’s OK; I don’t care if you die. I’ll just say it wasn’t the equipment; it was something you did wrong.” Most importantly, Hughye’s lifelong watch fascination drove him to take the challenge a step further: he would craft a mechanical Ralf Tech watch that could withstand the pressures at the record depths to which Bernabé would descend. He contacted a childhood friend who had a watch atelier in the Swiss Jura town of Lajoux, sent him the watch design he had cobbled together and gave him a year to develop a prototype. Numerous calculations — the thickness of the case and crystal, the placement of the Orings — were necessary to ensure uncommonly high water-resistance.
Hughye then contacted Haux Laboratories, based in Germany’s Black Forest, a manufacturer of divers’ decompression chambers. There, the prototype was tested in a water tank, unlike the majority of divers’ watches, which, according to Hughye, are never actually immersed in water to determine their water-resistance. “If you see ‘200 meters’ on a divers’ watch, it’s probably just a calculation,” he says. “It’s tested in a decompression chamber with air pressure, but there’s no water.” The prototype remained water-resistant to 400 meters — nearly 100 meters beyond what Bernabé would experience. Hughye knew the watch could handle the pressure; the rest was up to Bernabé.
On July 9, 2005, off the island of Corsica, all doubts were erased. Bernabé descended to 330 meters wearing Ralf Tech equipment, including the prototype watch, setting a new world record that still stands. (Hughye is proud to point out that the watch kept running even after Bernabé’s electronic dive computer, the device that was supposed to be its backup, failed at 300 meters.) Hughye quickly realized that it was his watch — not a Rolex, Omega or Blancpain Fifty Fathoms — that was now associated with a diving milestone, and jumped at the chance to market it in dive shops throughout Europe. Dubbing it the WR-1 (for World Record), he ordered 500 more from the workshop in Lajoux. It was when he approached a few Paris jewelers with the watches, who told him he should be charging more for them, that Hughye realized he might be able to build this side project into a going concern. He sold the Ralf Tech diving equipment company (which subsequently went bankrupt) but kept rights to the name, using it for a new line of watches, all modeled on the WR-1 prototype and still made in Lajoux by a team of 15 watchmakers. 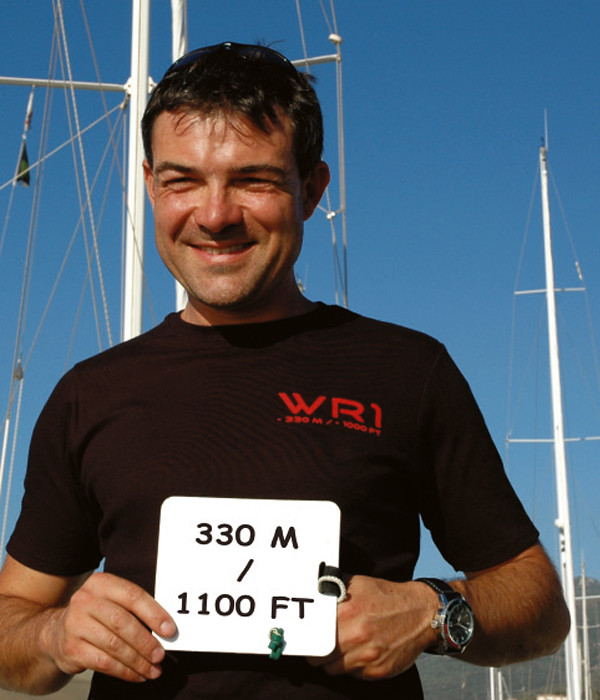 Ralf Tech watches are, as one might expect for a timepiece engineered to hold up 300 meters underwater, big, thick, and heavy. The cases of the two main Ralf Tech collections, the WRX Automatic and WRX Automatic Chrono, are made of 316L surgical steel (Night Explorer models have black PVD coating and Sunset Explorers have rose-gold PVD coating) and are 47.5 mm in diameter. Their curved sapphire crystals are 5.9 mm thick, with nonreflective treatment. The watches all have unidirectional rotating bezels and screw-down crowns and casebacks. Each watch comes with two interchangeable straps color- coordinated with the dial, one in alligator leather, the other in silicone. Hughye himself chooses the leather for the straps from a tannery.
The Automatic uses an ETA 2824-2 as its base, and its dial features the brand’s stylized water-droplet-shaped date window at 3 o’clock. The Chrono’s movement is based on an ETA 7750, with day and date in a window at 3 o’clock, 30-minute counter at 12 o’clock, 12-hour counter at 6 o’clock, and running seconds at 9 o’clock. Each model is a numbered, limited edition of 250 pieces. Automatics cost $2,450 and Chronographs are $3,950. Ralf Tech’s production is about 2,250 watches per year, a level Hughye plans to maintain going forward.
If it was a long and winding road that led Frank Hughye to the watch business, it is one he intends to follow for a while; after all, it took a while to get there. “I believe that in one life, you get several lives,” he says, “several chapters that make up the whole story.” Just don’t ask him any more about the brand name : that chapter is closed. 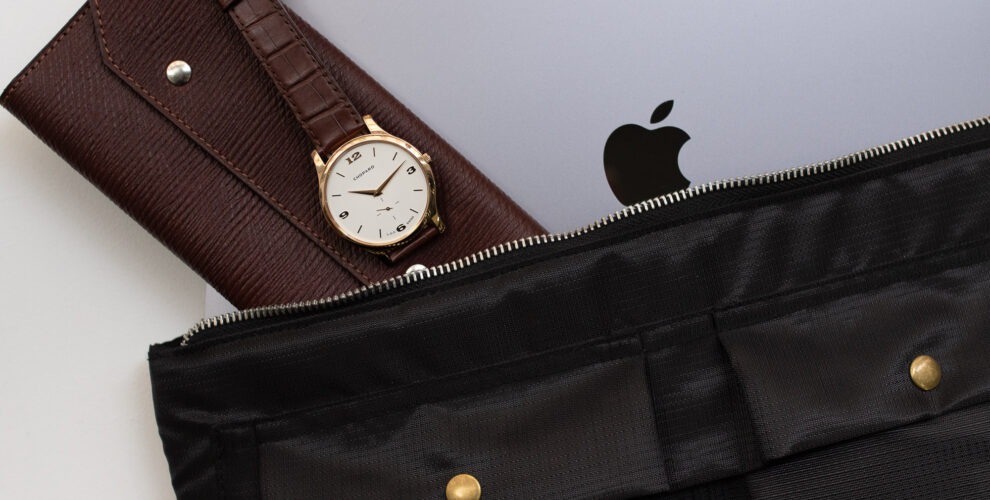